REGULATIONS IN THE U.S. AQUACULTURE: PERSPECTIVES FROM INLAND AQUACULTURE

Despite being the largest seafood market in the world, the US aquaculture sector has registered relatively sluggish or even negative growth in recent decades. Mounting evidence attributes this to the increasing complexity in the US regulatory environment. Excessive regulations not only hinder the growth of the aquaculture sector but also exert an economic burden on fish farms. The cost of regulations extends beyond the often-negligible permits and license fees. A large proportion is constituted by implicit costs such as the value of time spent on paperwork, cost of management changes, and economic value of lost opportunities. Over 1,300 regulations are found to affect US aquaculture and are categorized as environmental regulations, food safety, fish health, interstate transport, legal and labor standards, and culture of commercially harvested species (Fig 1). Among environmental regulations, the Migratory Bird Treaty Act has become the biggest concern for many inland aquaculture sectors such as catfish. Although the federal government has been making revisions to the existing depredation permits, its benefits to the farmers are yet to be discovered. Other regulations such as the Clean Water Act have caused certain aquaculture sectors such as trout to incur huge investment costs on wastewater management. Many of these regulatory costs are fixed costs that could only be spread over greater volumes of production, a difficult task for small-scale producers. In times when the US aquaculture sector is facing greater competition from the cheaper seafood imports, the huge disparity in regulatory costs relative to the Asian seafood trading partners hurts the US aquaculture in its effort to reduce the widening US seafood trade deficit. 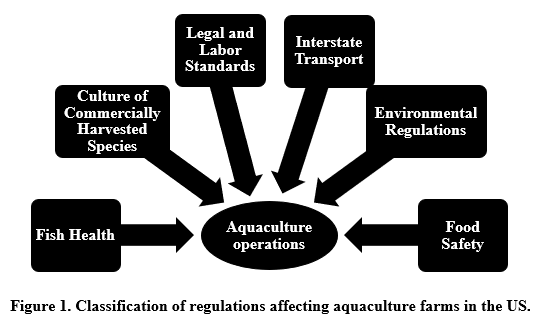