Aquaculture is the world's fastest-growing food-producing industry, accounting for half of all fish supplies in both the United States (US) and the rest of the world. Rainbow trout production in the US was about 21,600 tons in 2012, with a total value of $79.7 million dollars. A reoccurring problem in many areas includes high iron in the water. Iron (Fe) is an essential element for fish; however, excessive amounts can exert toxic effects in fish, such as causing lipid peroxidation in vital tissues and cells. Vitamin C is a powerful antioxidant while bentonite clay acts as a chelating agent. The overall objective of the study was to mitigate iron toxicity via dietary intervention (vitamin C and Bentonite).

At the end of the feeding trial, production performance of Trout fed Con, BenFe, MVCBenFe, HVCBenFe, was significant to ConFe (Fig. 1). The highest growth was seen in HVCBenFe group.  Also, the iron load in the liver was significantly higher in ConFe group. Histopathology of liver in ConFe (Fig. 2) group showed necrosis (nec), congestion (con), hemorrhage (he), and vacuoulization (V) compared to the other groups. Overall, dietary supplementation of vit. C and bentonite can be an effective approach to mitigate iron toxicity in the aquaculture trout industry. 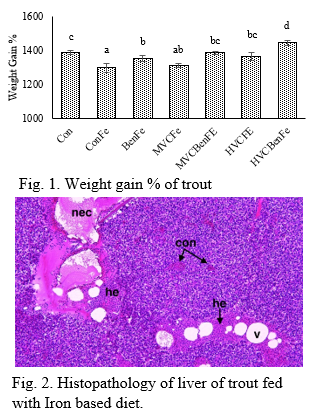