Black solider fly larvae (BSFL) and prepupae (BSFP) are increasingly being used as sustainable ingredients in terrestrial and aquatic animal diets , particularly as fishmeal becomes less readily available/more expensive.  T here are some indications that BSFL can impart health benefits to fish, including mitigating intestinal enteritis in some salmonids fed plant protein-based diets.  Most research focuses on BSFL as opposed to BSFP.  BSFP are a more advanced, non-feeding larval stage that proceeds their emergence as adult flies.  It is likely that BSFP have more chitin, based on having a harder/darker cuticle, but this has not been definitively confirmed.

BSFL and BSFP were produced on site from the same batch, using the same food, and under the same conditions; the only difference was their developmental stage.  Full fat BSFL and BSFP were analyzed for their proximate composition. Using this information, four isonitrogenous and isolipidic diets were formulated to include a fishmeal-based control diet (D1), soybean meal-based diet (D2), and soybean meal-based diets with BSFL (D3) or BSFP (D4) included at 11.90% and 9.83%, respectively.

Trial was 8 weeks and the survival, growth, feeding efficiency/feed intake, intestinal/liver histopathology,  muscle/liver biochemical/mineral composition, and expression of genes responsible for lipid metabolism were measured.   Survival was high  (95.5-100%) but  growth was D1 > D2 > D3 > D4, with each treatment significantly different than the others .  Lauric acid (C12), which is high in BSFL/BSFP, accumulated in the muscle and liver in fish fed D3 and D4, while mercury was detected in the liver of fish fed D4.   Intestinal histology in D3  had  less densely arranged villi  compared to those fed D1 and  D2 (Fig. 1), but no liver abnormalities .  Fish fed significantly less on D4 while liver histology revealed inflammation and necrosis in a third of the fish sampled .  D4 fish had significantly shorter/less densely packed villi (Fig. 1) .   These  adverse effects might be related to  excessive chitin  and thus is not recommended as a supplement in  the diets of largemouth bass. Relatively high amounts of lauric acid in both BSFL and BSFP may have also suppressed their appetites, as observed in other terrestrial and aquatic animals.  Further research is warranted to ascertain the influence of  lauric acid  in fish, because this may  require BSFL to be defatted to ensure sufficient growth. 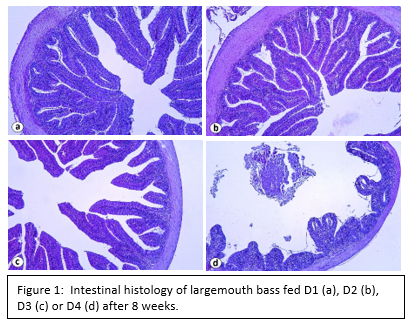