Totoaba Aquaculture and Conservation: Hope for an Endangered Fish from Mexico’s Sea of Cortez

This is the story of the totoaba Totoaba macdonaldi, an iconic and highly valuable fish from the Sea of Cortez (also known as the Gulf of California) in Mexico. Overfished to commercial depletion in the first half of the twentieth century, the species is currently listed as critically endangered and it continues to be threatened by illegal fishing, habitat degradation, and insufficient enforcement of fishing and environmental regulations. Few fish are as interesting as the totoaba from the standpoints of biology, conservation, sociology, and regulation. Now aquaculture has the potential to bring totoaba back as a sustainable resource and to generate prosperity in an economically-depressed region of Mexico. 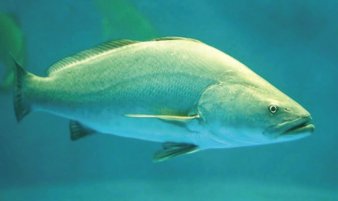 Totoaba are remarkably well-suited for aquaculture. Hatchery and grow-out technologies have been developed and commercial production trials are currently underway. Totoaba growth is among the fastest reported for any farmed marine fish and their quality as a food fish is high. Their status as a critically-endangered species presents unique challenges. In this article we present the history of the fishery and how perverse economic incentives and enforcement challenges resulted in its commercial depletion. We go on to present current advances in hatchery and grow-out and to show how regulatory considerations affect the species, leading to an opportunity for fishermen, regulators, researchers, aquaculturists, and conservationists to work together to restore the fishery, promote regional socio-economic development, and ensure the preservation of this iconic species for future generations.

The totoaba (Fig. 1) is the largest of the Sciaenidae, a family that includes fish commonly known as drums, croakers, corvinas, and sea bass. Totoaba can reach a weight of 135 kg, a length of 2m, and live up to 30 years (Berdegue 1955). Their body is elongated with a sharp snout, large oblique mouth, and a projecting lower jaw. Juveniles eat mainly small crustaceans off the bottom and smaller fish from the water column. Totoaba are schooling fish endemic to the Sea of Cortez in Mexico (NOAA 2016). Adults are one of the top predator fishes in the upper Sea of Cortez and have pelagic feeding habits, favoring sardines and anchovies, although benthic crustaceans, such as shrimps and crabs are also part of their diet (Cisneros-Mata et al. 1995).

Totoaba spawn during the late spring in the turbid waters of the Colorado River delta, a biosphere reserve at the northernmost tip of the Sea (Fig. 2). Juveniles typically stay in that area for one or two years before migrating south on the peninsular side, following the schools of sardines and anchovies on which they feed. Their summer feeding grounds extend south to Bahia Concepcion on the Baja Peninsula, and occasionally farther south to the Bay of La Paz (Valenzuela-Quiñonez 2014), and possibly even as far as San Jose del Cabo (Peet 2009). However, we recently received a trustworthy record and photographs of an approximately 45-kg totoaba captured south of Puerto Vallarta, much farther to the south of the reported range of the species.

Fish in these summer feeding areas are thought to cross the Sea to the mainland side, south to the delta of the Fuerte River in Sinaloa, where they feed during the fall. Once they become adults after another 4 or 5 years, schools of totoaba migrate northward in the winter along the eastern coast of the Sea of Cortez, returning to their natal spawning and nursery areas near the Colorado River delta, where they remain through the spawning period the following spring (Cisneros-Mata et al. 1995).

The swim bladder is an internal, gas-filled organ that fish use to regulate buoyancy. In totoaba and other sound-producing fish it also functions as a resonating chamber for a group of specialized muscles that vibrate against it, producing a croaking or drumming sound used for communication and location purposes. The swim bladder has properties that make it highly appreciated as an ingredient in Chinese cuisine and medicine. Fish swim bladders, known as maws, are prepared in traditional soups or stews. Dried swim bladders of totoaba are known in China as jin quian min, which translates to “money maw.” They are highly appreciated due to their similarity to those of the Chinese bahaba, or giant yellow croaker Bahaba taipingensis, once abundant in the south of China, but now overfished and affected by pollution to the point that it is extremely rare to catch this fish.

Totoaba maws are valued for their high collagen content and some people believe they can boost fertility, circulation, skin vitality, and longevity. Because of these perceived properties and their scarcity and illegal status, dried swim bladders of totoaba command astronomical prices. Typical prices to the consumer in Hong Kong vary from about US$2,600 for a 100-g dry totoaba bladder to US$25,000 for a 500-g unit. The Chinese have been known to stockpile the more valuable bladders as a form of speculative investment and to use them as currency.

Illegal fishermen in the upper Sea of Cortez are paid US$3,000-5,000/kg of fresh swim bladder, known as buche de totoaba in Mexico. Historically Chinese demand for totoaba maws drove the development of the commercial fishery in the upper Sea of Cortez and, paired with challenges in enforcement of fishing regulations, contributed to its eventual collapse in the mid-twentieth century. To this day, the economic incentives for illegal fishing and trafficking of totoaba continue to threaten the possibility of establishing a sustainable fishery and the very existence of totoaba and related valuable species.

The story of the totoaba fishery is one of greed, short sightedness, and ineffective governance, tragically driving a valuable natural resource to near extinction, while contributing to the impoverishment of the local population, rather than to their prosperity. Before the commercial fishery began at the turn of the twentieth century, totoaba were part of the diet and folklore of the indigenous people. The Seri people of Sonora used harpoons with large points to spear totoaba in shallow nearshore waters (Bahre et al. 2000). Stories abound of how incredibly plentiful and large the totoaba were in those days.

Asian demand for swim bladders prompted the beginning of a hook and line fishery around 1910 in the coastal waters between Guaymas and the delta of the Fuerte River. Devoid of effective regulation, in a frontier region often forgotten by authorities, the exploitation of totoaba was characterized by wanton waste. Fish were dragged onto the beach, slit open, and their swim bladders were removed, dried, and shipped to China via San Francisco (Bahre et al. 2000). Lack of refrigeration and transport infrastructure, together with the high price of the swim bladder, made perverse economic sense for the totoaba carcasses to be left on the beaches to rot (Fig. 3). These practices accelerated so swiftly that totoaba was already commercially depleted in that zone by the 1920s, and fishing moved north towards the mouth of the Colorado River, the spawning and nursery grounds of the fish (Kira 2005).

In the early 1920s fishermen discovered that totoaba aggregated for spawning in great numbers in the waters of the Colorado River delta. The commercial fishery took advantage of this reproductive migration and thus became the most important economic activity in the area; so important that it brought about some of the first permanent settlements along the northern coastline of Sonora and Baja California (Bahre et al. 2000), including the fishing camps of San Felipe (1923), Golfo de Santa Clara (1927), and Puerto Peñasco (1928). A market for totoaba meat began to develop across the US border in California and Arizona. During those years the totoaba fishery attracted people to areas that previously had been practically unpopulated, with important sociological and ethnographic consequences. For example, permanent settlement of the Seri indigenous group in Bahia Kino ended their traditional seminomadic ways as hunter-gatherers and was the main cause of their assimilation into Mexican culture (Bahre et al. 2000).