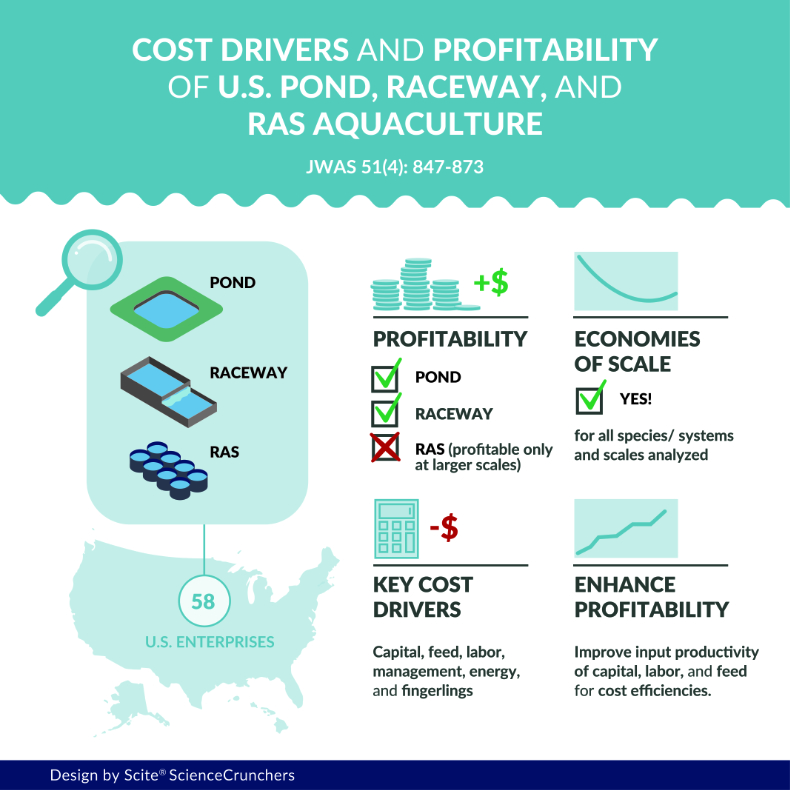 Decision-makers looking to address sluggish aquaculture growth in the United States can benefit from this thorough analysis of aquaculture enterprise budgets. Engle et al. reveal in their latest article that RAS enterprises producing key species (Atlantic salmon, trout, and tilapia) generally fail to show profitability in the United States, although there are a few U.S. RAS that have operated profitably for more than 15 years. Scaling up RAS enterprises helped to reduce the per unit product losses but all RAS remained unprofitable. The authors identify improving labor and capital productivity as ways to improve RAS profitability beyond upscaling. Pond production of catfish, trout and largemouth bass all exhibited greater labor and capital productivity and were shown to be profitable in the long term. Systems with high variable costs could increase profitability with improved FCR and higher labor productivity.

Integrating macroalgae and other extractives into intensive net-cage systems is novel in tropical nations, where large potential for integration exists. The authors of this study were able to show that high value Kappaphycus alvarezii grew significantly faster in fish farms containing pompano, grouper and Asian sea bass, when compared to control sites. Results also showed a significant uptake of N and P outputs by the algae, with six kilograms of seaweed absorbing up to a third of the cage outputs of NH4 + and PO43- on average during daylight hours. Overall K. alvarezii is shown to be well-suited to reducing net-cage nutrient outputs while producing a valuable new product.

Seaweed culture is expanding and diversifying globally, as are seaweed uses. Ward et al. offer a thorough review of the diseases and pests that have emerged or become more prevalent in the past few years, and which are affecting seaweed production performance and quality. Taking Asia as the primary center of production worldwide, they summarize the diseases reported for the main aquaculture species and offer information on mitigation and management measures including suggestions for future practices.  Improved diagnostic capacity and understanding of causes of disease, combined with better monitoring of these factors in conjunction with environmental conditions are identified as key future directions.